The small size and connectivity aspects of Raspberry Pi Zero W makes it a great candidate for IoT Hub scenarios. It can be easily programmed using Python, so it has great potential. This project primarily explains how to do the headless installation of Raspbian OS and Python using Windows and VS Code. It will get you started.

Headless Pi can be accessed using SSH via WiFi.

Apart from SSID and password, the file may need some other changes. Here are some tips:

Please save the files locally too. As the wpa_supplicant.conf file may needing tweaking. And after you plug the SD card in the Raspberry Pi Zero and again in the PC, you might find that the files that you created have disappeared. That is normal.

Open Terminal in VS Code with Powershell

Before installing Python, you may want to make sure that the Raspbian OS is up to date. To get the latest update, run the following command:

Now you are ready to program Raspberry Pi Zero W. Before you connect your circuit, shutdown the Pi from SSH using the following command and disconnect the USB.

This is a small project that shows communication with GPIO port and prints a message. It consist of a PIR motion sensor that detects if a human is in front of it. Based on that it sets the port to High when something is in its vicinity and to low when nothing is near by. The program will print 111 or 000 depending upon the state of the port. (Why take trouble to turn LED on/off, if you can see the print message?)

Connect the circuit as follows: 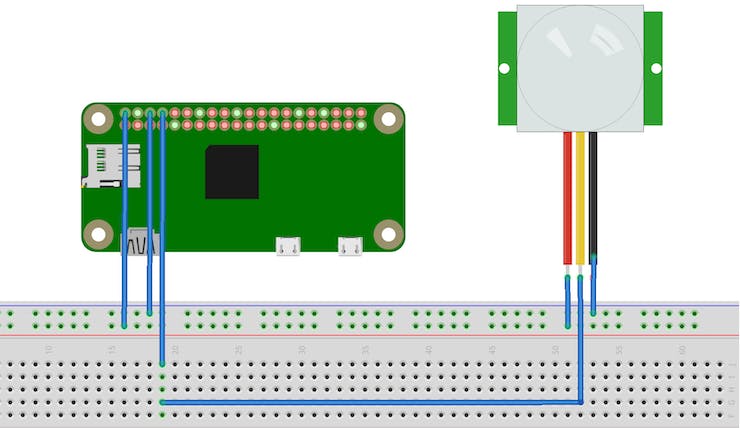 It is assumed that you are familiar with Python. In the program, GPIO ports are declared using BCM convention and are initialized using RPI library. The loop monitors the port with 1 second interval and prints corresponding message. Here is the code:

After the transfer, go to VS Code -> Terminal, SSH into Raspberry Pi.

With ls command you will see the transferred file there. Now run the following command:

You will see 000 and 111 being printed based on what is in front of the PIR sensor.

Hope this gets you started on Raspberry Pi Zero W with Python 3. Please share the post to spread the word.